You might be asking yourself just what in the Sam Hell a gooseberry is. I first had these tart little beauties at a tiny English Tea room in San Antonio, which is probably the oddest place in the world to have them. They really only grow in cold climates like England and the Northeastern Seaboard of the U.S.

In the tea room, my pal Liz and I had gooseberry crumble. The gorgeous tart berries hidden under crispy crumble and topped with fresh cream were a divine revelation. I’ve thought about that dessert often since then, but until a few weeks ago, had never found a fresh gooseberry for sale. An early morning trip to our town’s farmer’s market brought excitement and joy. I just knew that the gooseberries would pair perfectly with the Honey Crisp apples I’d picked up at the stall before.

Apple pie is probably James’s top dessert, though it fights for that position with Carrot Cake. He was pretty happy to come home from work and see this baby chilling on the counter top. 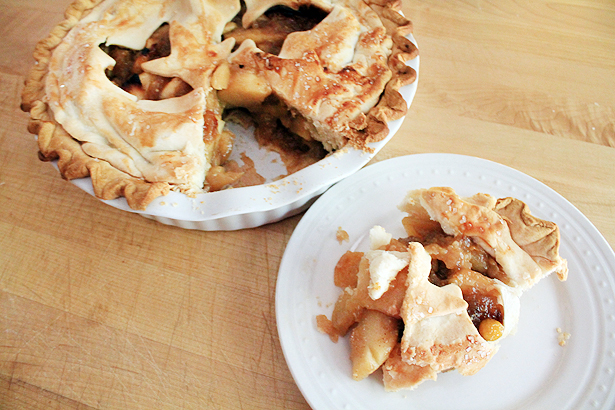 Gooseberries are in the Tomatillo family, so they have a similar papery husk that comes right off. In England, Gooseberries are green, but here in the U.S., they tend more towards an orange hue.

As they’re mixed into the apple pie filling and cooked down, they add a perfect tartness you might also get with lemon juice. They pop when you bite into them, much like a cherry or tomato, but there’s a sweet-sour note that will surprise and delight.

So go on, have a slice. I may or may not have had one for breakfast the day I took these photos.

Note: I have learned that this pie is in fact made with Cape Gooseberries, which are a different species to the Gooseberries grown in England. However, their flavor profiles are almost identical, and you can use them interchangeably.

Directions
Peel, core, and slice apples into 1/4″ thick slices. Place in a bowl and sprinkle with lemon or lime juice, whatever you have on hand. De-husk and wash gooseberries.

In a large pan, melt butter on medium heat. Add sugar, apple pie spice, and vanilla extract. When well combined and liquidy, add apple slices and gooseberries. Stir well to coat the fruit, then reduce heat to low and simmer for half an hour to an hour, until fruit is nice and soft.

In the meantime, prepare your favorite pie crust for a 2-crust pie. Homemade, store-bought, we’re not going to judge.

When the fruit is nice and soft, add KAF’s Pie Filling Enhancer and stir continuously until liquid is thickened. Immediately pour into prepared pie crust lined dish and top with second pie crust. Make sure to vent.

Bake at 425F until golden brown, usually about an hour. Make sure to cover the edges until about the last 20 minutes of baking to prevent over-browning.

This filling can also be used in cobblers, crumbles, or crepes. Enjoy! 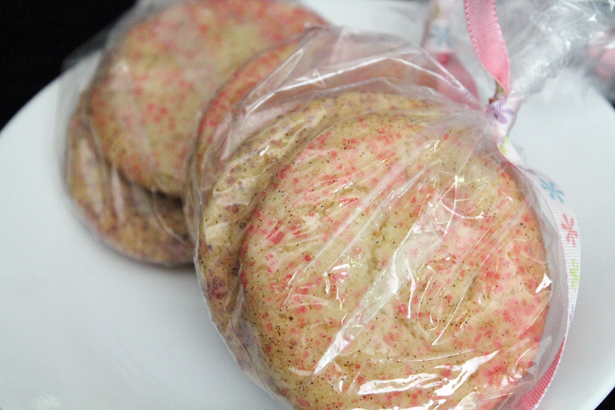 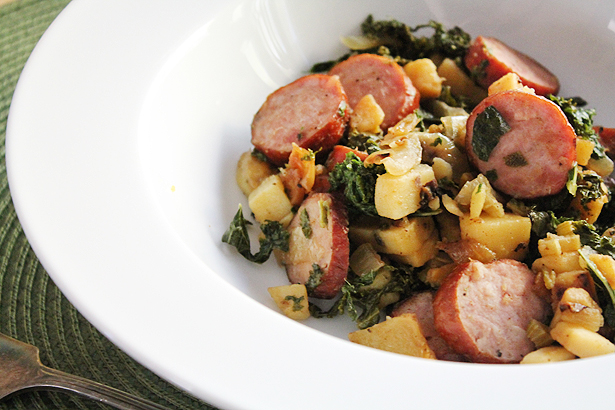 Next
Kielbasa, Apple and Kale Hash

Your recipe looks great! But to correct &/or enhance your information, we live in the southwest corner of Ohio & have been growing gooseberries successfully for a long time. And the variety we grow, which we obtained from an elderly friend who had been growing them foerever, is green, ripening to purple.

Nancy, thanks for your comment. It appears there's a great gooseberry debate. In England, they're most certainly never purple. I think there must be multiple types that grow in specific areas, and we all just call them gooseberries, instead of being more specific. Thanks for letting my readers know though. So long as they're tart, they'll be great in this recipe :)

Actually you are not correct. What you are describing is called Ground tomatoes, or groundcherries (they fall to the ground when get ripe) ,they are small and have husks around them like tomatillo and are sweet.Gooseberries are green and have what looks like veins on the surface , they are very tart, if they remain on the shrub long enough they turn dark red. They are grown mostly in Europe and I should know as I gew up there. You can find gooseberry preserves on the shelves of supermarkets where you can see the picture of this fruit.I actually grow them here in NJ and will make a gooseberry preserve as well as tarts.

If you see my update at the bottom of the post, these are referred to as Cape Gooseberries, which are a different species than the European gooseberries. I am fully aware there is a difference, however even the farmer I bought them from called them gooseberries. So while I respect that you grew up in Europe (so did my husband) and there's a completely different plant and fruit there with the same name, please note that in the US these are most definitely *also* known as gooseberries.

I thank you for stopping by.

That looks like a delicious recipe! I grow both Gooseberries and Cape Gooseberries, so I'll have to try this pie with both fruits. Thank you for posting this!

I've heard of gooseberries before, but never used them in my kitchen. I think this pie is calling my name, though. Yum!

I love the sound of this pie! I saw gooseberries at the you-pick farm this year but didn't get any - I'll have to put them on my list for next year!!