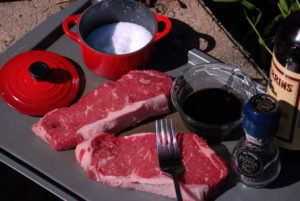 When you’re from Texas, you feel a certain responsibility to how you treat beef. Texas is cattle country, first and foremost, from the panhandle to the southernmost tip. Even the Ford Motor Company knows how seriously we take our cattle ranching – they developed the King Ranch Edition Ford F150 for the largest cattle ranch in Texas, to their specifications. The truck became so popular they started selling the King Ranch edition to the general public.

Our barbecue is all beef based (brisket, ribs, and pulled meat sandwiches), and when it comes to grilling a steak, well, there’s a certain kind of reverence paid. No self respecting Texan would char a steak into well-done territory. In fact, I used to work with a guy who’d tell a waitress, “Put it on the grill, count to 5. Flip it, count to 5 and then BRING IT TO ME. Anything longer than that and you’re starting over.”

The reason for this is that the longer you cook beef meant for steaks, the more inherent flavor you lose. Beef is aged for a reason. Beef is cut the way it is cut for a reason. It’s all meant to enhance the natural flavor of the meat. As far as many a Texan is concerned, the only garnish a good steak needs is salt and pepper. Forget the A-1, forget the pepper sauce.

Now I, I am definitely of that mind. My favorite way to have a steak is marinated in what I’ll describe below, cooked to medium rare, and then sprinkled with a good kosher salt. If the meat is aged right, and the cut is good, there is absolutely no reason to add anything else. For me, it’d be gilding the lily – an unnecessary, bordering on offensive, thing to do.

The story can be different, however, if you don’t have a good cut of meat. Steaks should be from the loin or sirloin. This is where all the tenderest cuts lie. If you don’t have a tenderloin, t-bone, porterhouse, or strip steak in front of you, then you’re better off accentuating that steak with a good pan sauce, like the one TickledRed makes. Steak sauce made with whiskey? Totally approved.

I’ve been grilling steaks since about the age of 10, because my Dad always cooked mine too long. I took over the grill, and never looked back. Along the way, I’ve learned that a good, simple marinade, left to permeate the meat for at least an hour, is the secret to a perfect piece of beef, every time. Someone once told me that the steak I made them was the “best steak ever in their life”. Now that, that was music to this Texan’s ears.

Keep it simple, and don’t cook to well done. You’ll enjoy steak a lot more. But I promise not to judge – let me know how you like your steak cooked. Have you used marinade before or do you just throw it on the grill with spices?

Place steak or steaks in a gallon sized ziploc bag. Add soy sauce, Worcestershire sauce, salt and pepper to cover. Seal bag, rolling carefully to remove all air. Place in refrigerator for at least an hour, longer if possible. Remove from bag when ready to grill. Sprinkle salt and pepper over steak again when ready to serve. 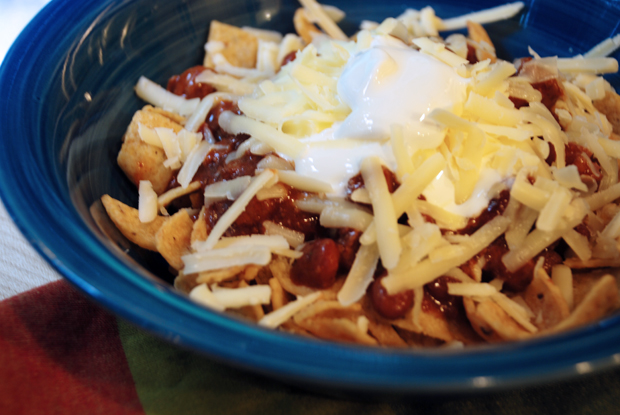 Next
Pumpkin Spice Bites & a Giveaway!

My husband, son and I love a great steak and I do very similar to what you do...When out I never get a steak, b/c I can do it better at home...that is unless the restaurant we are at is KNOWN for killer meat - having access to much better steak than we do! My husband however gets steak...like everywhere...he is a nut! I would love to visit Texas some day and have a steak cooked the Texan way for sure!!

Man, Oh man. I can't wait to grill with you next time I'm up in your area. You made my mouth water just reading this. I know seafood, but I would love to learn more about my beef from a Texan ;). Thanks so much for approving my steak sauce, seriously.

Tracy - Do it! You've got to enjoy that grill while you can.

Jen - You crack me up! Weldon.. LOL. I've had steak with the Montreal rub, and they're okay. But they're not tender enough. Try it with this marinade AND your rub, I think you'll find a more tender, succulent steak comes off your grill.

Christina - It's so nice to have a fellow Texan around! That's one of my pet peeves too. And NY BBQ places are notorious for it. "Texas Pulled Pork" I saw on one menu. THERE IS NO SUCH THING. Insulting, really.

I love this post! I found myself nodding emphatically to everything you're saying about the way we Texans feel about beef!

It's my pet peeve when people think Texas BBQ contains pork or chicken or anything else un-holy. Texas BBQ is beef and only beef! Amen!

I'm from New England so I will bow to your superior steak knowledge and try this sometime. I took a long road from well-done as a child (which my mother still prefers)to more of a medium-rare kind of girl now. I usually go for a nice Montreal-style steak rub though rather than a marinade. (p.s. - my maiden name is Weldon so maybe that's why my mother thougt we should cook all our meat that way. ;-) )