The call to arms went out from @Scharffenberger via Twitter: @SeriousEats had just posted a homemade bagel recipe to their website, SeriousEats.com. Who would be willing to try making chocolate chunk bagels using Scharffen Berger’s baking chunks?

My hand (and @ reply) went up faster than you can say gourmet chocolate. I was first introduced to Scharffen Berger at BlogHer Food in October of last year. Before that, I wasn’t aware it existed. My life has improved markedly since that sunny day in San Francisco, if you hadn’t guessed. Good chocolate can certainly be attributed to some of that. Scharffen Berger chocolate is beautiful, perfect, pure. It’s my favorite chocolate to bake with, and its quality is worth every stinkin’ penny.

I read through the Serious Eats post several times. I was nervous. I’m a Texan. What do I know about making bagels? Until I moved to the East Coast, I’d only ever eaten bagels from the grocery store. It didn’t even occur to me I could make them at home.

People: stop what you’re doing. Listen to me now. Not only can you make bagels at home, but it is easy. 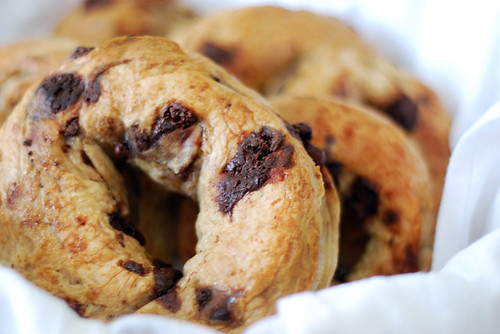 The dough comes together in minutes. After it’s risen, simply make yourself an assembly line for the boiling process. Then it’s a toss in the oven to finish. Minus the rising time, it takes 45 minutes to make bagels, from start to finish.

Imagine biting into a freshly baked, freshly toasted chocolate chunk bagel slathered in cream cheese or KerryGold Irish Butter next Sunday morning. It can be your reality. Really.

Ingredients
3 1/2 c. bread flour (I used King Arthur)
2 1/2 tsp. instant dry yeast
3 tbsp. sugar (I upped the sugar quotient to match the chocolate. If you are making savory bagels instead, drop this to 2 tbsp.)
1 tsp. salt

1 1/2 tbsp. barley malt syrup (I found this at a health food store. I’m told it’s also at Whole Foods. Trader Joe’s does not carry it. I asked.)

Directions
The SeriousEats website recommends making the dough in a food processor. But I didn’t want the processor to break up my baking chunks, so instead, I used a standing mixer. You could probably use a hand mixer for this too.

Place the bread flour, yeast, sugar, and salt in a standing mixer bowl. Mix on a low speed until all dry ingredients are well combined and aerated.

Add the chocolate chunks and mix again until the chunks are well distributed. Leave the mixer running on low speed.

Run your tap water to the hottest it will go, and measure 1 1/2 cups into a measuring jug with a pouring spout. Begin slowly pouring it into your mixer as it continues to mix. I found a steady, slow stream from the cup worked perfectly.

When the water had all been added, I found that there was a slight pocket of flour at the bottom of the bowl. I removed the bowl from the mixer and began working these “crumbs” into the dough. When it seemed like they wouldn’t work into the dough anymore, I added another splash of water – no more than a teaspoon, and worked with my hands again until all the flour was incorporated.

When the hour is up, begin boiling 4-6 quarts of water in a large soup pot. Add the barley malt syrup to the water at this time, and allow it all to come to a boil. Also preheat your oven to 400F.

Prepare a large baking sheet with parchment paper and set next to the stove.

Sprinkle a flat surface with a little more bread flour, and then turn out the dough on to it. Press the dough flat with your hands until it resembles a rough rectangle and you’ve pushed out some of the air.

Divide the dough into roughly ten equal pieces. I’m extremely bad at this part, and I did end up with some really big bagels and some really little bagels. It doesn’t seem to have affected them in any way.

Roll each dough piece out into a long cylinder and then join the two ends over your hand or fingers. I found that you really need to squeeze and pinch the dough where you want it to join so that it doesn’t come apart in the boiling stage.

When all 10 bagels have been rolled and joined, cover them with plastic wrap again (I reused what was on my bowl) and allow to rise for 10 more minutes.

Prepare an area next to your stove with a stack of clean paper towels. Also, find a slotted spoon or spatula. I used a flat metal spatula, and it worked perfectly for the next part.

The pot of water should be at a rolling boil now. Pick up one bagel with your flat metal spatula and place it in the water. You will allow the bagel to boil for 30 seconds on each side. The SeriousEats post said you could boil up to 3 at a time, but I found it easier to do one at a time. I set my oven timer to one minute just before dropping the bagel in the water, hitting start with one hand while placing the bagel with the other. At 30 seconds, use the spatula to flip the bagel over in the water.

When 1 minute has passed, remove the bagel with the slotted spatula to the clean stack of paper towels. Pat the bagel dry of excess water, and then flip onto the baking tray from the paper towel. Your paper towel will become covered in bits of melting chocolate as each bagel is dried. I simply started with a fresh paper towel on top of the old ones when the first one became too sullied.

Continue with this process until you have boiled all 10 bagels. Now place the baking tray into the oven.

Bake for 15 minutes. Using the same metal spatula, flip the bagels after the 15 minute mark, and allow to cook for 10 minutes more.

Allow to cool, and then dig in! I spread a bit of cream cheese sweetened with brown sugar onto my bagel, and it was sheer perfection. 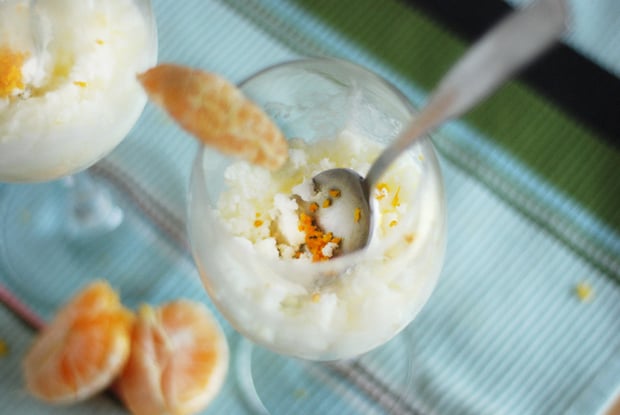 These are amazing bagels! I have made bagels using other recipes before and I have to say this recipe is the absolute best! I have to run to four different groceries in order to find the malt syrup though. I have a question....would this recipe also be suitable for making cinnamon raisin bagels? So instead of chocolate chunks, I would guess adding cinnamon, raisin, and a bit of malt syrup into the dough instead?

I've never made bagels before, but now I'm tempted. I'll try just about anything with chocolate in it!

I'd love to have you share this recipe on my weekly link up, Sweet Tooth Friday. I hope to see you there. http://alli-n-son.com/2011/04/07/jelly-bean-cookies/

These look just spectacular! Glad they turned out well for you... I'm feeling inspired to make some bagels now!

Beautiful bagels! And, yes, I agree. Using a good quality chocolate makes such a difference.

I just stumbled upon your blog and I'm so glad I did. I've never made homemade bagels before and now I'm inspired, specially because of the chocolate part.