If you’re Texan, you know Shiner. Shiner, Texas, that is. Famous for one thing: Shiner Bock beer. Spoetzl Brewery, where Shiner Bock is brewed, has been in business since 1909, and is the oldest independent brewery in Texas.

Shiner Bock is Spoetzl’s flagship beer. Brewed since 1913, this dark and dangerous brew was originally considered a lent beer. Only about 30 years ago did Spoetzl start making Shiner Bock year round.

Now, we’ve discussed before that I’m not a beer drinker. But I sure can use it in a baked good. It makes me a very proud Texan to say just how amazingly diet-crash-worthy these cupcakes are. 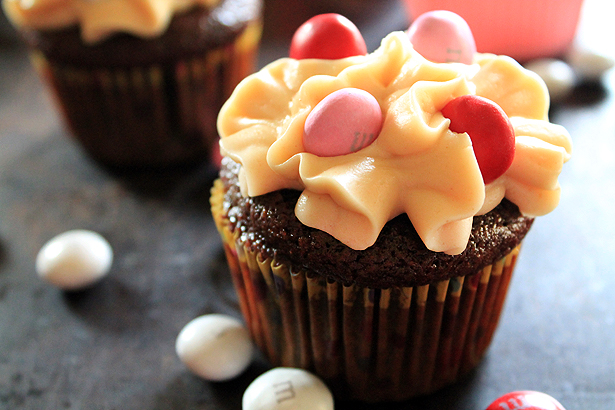 They’re exactly the sort of dark and dangerous you want to make for a sweetheart this Valentine’s day. The beer is nowhere near as dark as Guinness, but I think it goes just as well with chocolate as the stout does.

Shiner Bock doesn’t overwhelm the cupcake, but you can definitely tell it’s there. A delicious, deep undertone that will have people asking you, “Just what is in this cupcake?”.

And don’t worry – they’re safe to share with your favorite mini-Valentines. The alcohol cooks out as the cupcakes bake.

Be sure to use a high quality cocoa powder like Scharffen Berger to achieve fantastic chocolate flavor, okay? 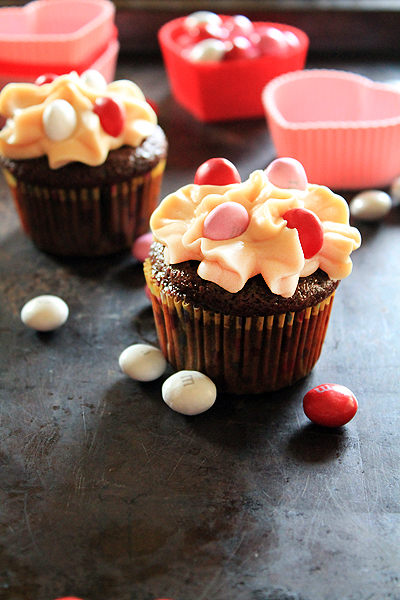 For the Cupcakes
Preheat the oven to 350F.

In a medium bowl, combine flour, cocoa, baking soda, and salt. Whisk thoroughly to aerate and combine, then set aside.

In a large bowl or the bowl of a stand mixer, combine sugar and melted butter. Mix on medium speed until well combined, then add eggs, one at a time, mixing after each addition.

Line a muffin tin with paper cupcake liners. Fill each cup 3/4 of the way full with batter. Bake for 23-25 minutes, rotating the pan once, halfway through baking. Allow to cool completely before frosting.

For the Frosting
In a large bowl, cream together cream cheese and peanut butter until light and fluffy. Add vanilla extract and mix again until all liquid is fully incorporated.

Slowly add the powdered sugar in increments, mixing well after each addition on low speed at first, and then medium as the sugar mixes in. Mixing on a higher speed after a few moments will allow more air to get into the frosting, making it lighter and fluffier.

Continue mixing until the entire 2 pound bag is incorporated into the frosting. I found that at this point my frosting was the perfect consistency, but if you like it a little thinner, add some heavy cream or half and half, 1 tablespoon at a time, and mix until you get your desired consistency.

If you find you want it a little thicker, refrigerate first, to firm up, for about 10 minutes. Remove from the fridge, and beat again in the mixer. If you find the frosting too thin, you can add more powdered sugar at this time.

I like a lot of frosting on my cupcakes, and this makes enough frosting to liberally cover 24 cupcakes. Don’t be shy!

After frosting each cupcake to your liking, top each one with a few Valentine’s Day Peanut Butter M&Ms.

You can refrigerate the cupcakes for up to 3 days, but I don’t suggest adding the M&Ms until you’re ready to serve. The moisture in the frosting will erode the candy shell on the M&Ms after a day or so if you add them immediately. 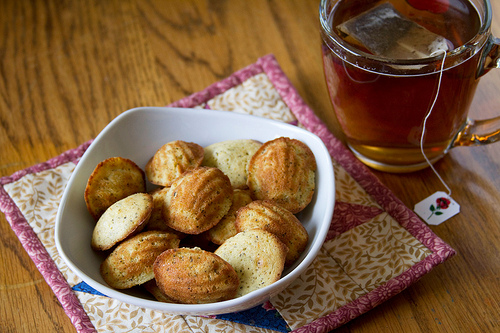 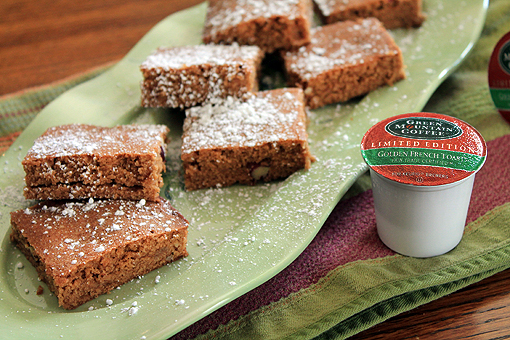 […] of time, you know that I love to bake and cook with booze. From Woodchuck Hard Cider Bread to Shiner Bock Cupcakes, if I can figure out a way to infuse the recipe with earthy notes from a little alcohol, I’ll […]

These look delicious! I wanted to make a cake instead of cupcakes...What changes should I make for two eight inch cake pans? Longer time? ? Thanks!

AG, you'd probably need a slightly longer cooking time, but only by a few minutes. Check the cakes at 22 minutes, and then again at 25. You want a toothpick to come out of the center cleanly, but leave them slightly underdone. The cakes will cook a bit more while they cool, but stay moist.

Saw the post for this recipe, shared by Sweet Sugarbelle. I was skeptical (I'm not a beer lover) but made them for a Texas Independence Day celebration. Holy cow, they were great! (I added some homemade vanilla buttercream frosting into the peanut butter cream cheese frosting & thinned it with a dash of buttermilk.) Yum! Thanks for posting the recipe (and thanks to Sugarbelle for sharing it)!

Looks so good. A great recipe to treat my husband will love the cakes he loves his beer but also the M&M’s.