I’m going to admit something to you now: This post is having a total identity crisis. It seemed simple enough. It’s March (p.s. how the hell is it MARCH?), which means St. Patrick’s Day. It means lots of Irish themed food, like Irish Soda Bread, will start popping up in the grocery store, the blogs, and restaurants. And let’s face it: no one’s going to pass up an excuse to drink copious amounts of green beer and eat Guinness Stew.

Here’s where the identity crisis comes in. My husband adores the fruit laden, icing topped Irish Soda Bread we find in our local grocery store. I decided I’d make it for him, and for you all, and it’d have a lot less chemicals in it than its grocery store counterpart.

Then I started researching Irish Soda Bread recipes. Hardly any of them had fruit. None of them had icing. After a quick poll of my favorite food blogging friends across the United States, one thing became clear. This icing topped sweet breakfasty bread: it’s a warped New Jersey-only phenomenon.

I don’t really know what to say to that, except that I know my husband loves it, so maybe you will too. Is it authentic Irish Soda Bread? Not to someone born and raised in Ireland.

But it is bread made with baking soda and buttermilk instead of yeast, which is the scientific definition of a soda bread. It’s a fun treat for St. Patrick’s Day, and probably better for your Paddy’s day breakfast than Green Beer. Just sayin’.

Do you have any St. Patrick’s day traditions? Ours is apparently to buy this non-authentic bread, which we’ve been doing since we moved back to the U.S. in 2006. Not any more though, because now I can make it myself!

Whisk together flour, baking soda, salt, brown sugar, nutmeg and caraway seeds (if using) in a large bowl. Add both kinds of raisins and stir to distribute evenly.

Pour in buttermilk and stir gently to combine. Remove any hand jewelry and gently knead within the bowl into a round ball, usually 2-3 minutes. Dough will be sticky, but should be fairly well combined. Turn out onto a parchment lined baking sheet and form and flatten until you have a 6″ disc.

Cut deep cross-hatch through the middle of the bread to allow for proper baking all the way through.

Bake for 30 minutes or until golden brown and sounds hollow when thumped with your knuckle.

Allow to cool, then enjoy with some raspberry jam and a nice cuppa. 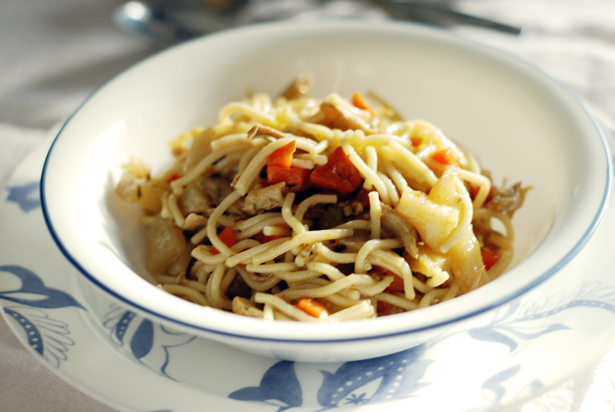 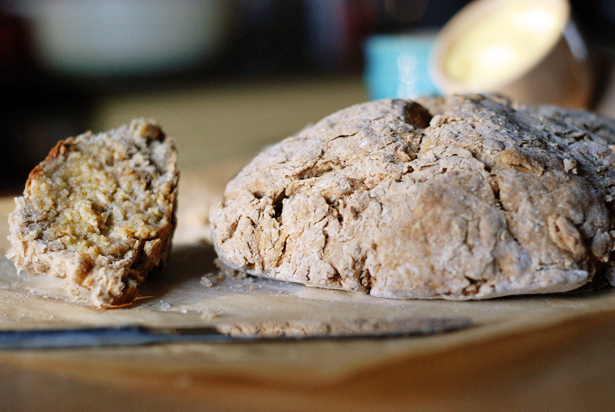 Next
Irish Soda Bread, for real!

Great blog; happy I found you!

OK, I've never had ISB either, but your version looks like the perfect place to start.

Amber, this looks delicious. I think I've only ever had the warped NJ kind. Yours looks so much better.

Non-authentic or not, it looks delish! I actually think I may prefer the Jersey version!

My criteria for soda bread is baking soda... Problem solved! Granted, I am not Irish, nor do I really know anything about soda bread other than that my mom used to make it when I was a kid, and I've tried my hand at it once or twice. This looks a lot like what my mom made, though... She always put raisins or cranberries in it. Yum!