I’ve been meaning to get an entry up for a while. I missed all the Valentine’s Day shennanigans, so instead, I’ll bring you a cake perfect for Easter-Spring-Fiestaish celebrations.

It used to be that I’d pick up a box of cake mix and just.. follow the instructions. But last year, I started reading other food blogs with more earnest. Right about then, I realized that a box of cake mix ain’t nothing but a base for any kind of cake your imagination can think up.

So I bring you Happy Cake. James and I have dubbed it so for two reasons: 1) How can you look at the bright pink cake with sprinkles and not think happy? and 2) This year is the first year that our nephew Davey really gets birthdays. Along with that, he’s decided that EVERY cake is birthday cake, which he calls HAPPY CAKE (as in – happy birthday cake).

Davey regularly asks his momma to help him make Happy Cake or CuckCakes (cupcakes). That kid is such a trip, and he’s not even three. He’s a big fan of cake in general, is he. 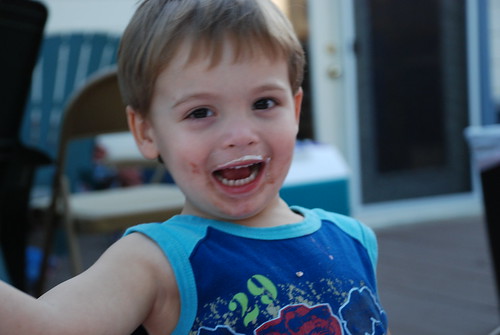 See what I mean?

On to the HAPPY CAKE!

Start by emptying the cake mix packet into a large mixing bowl. Dump the packet of Strawberry Gelatin on top of that. Oh, and also.. Preheat your oven to whatever it says on the box. This one said 350F.

Basically, I then followed the box’s directions regarding wet ingredients – adding 1 1/4 c. of water, and 3 egg whites. I stopped short of the 1/3 c. of oil it called for.

Mix the wet ingredients into the dry, stirring until well combined. The box said to use a mixer, but hey. Elbow grease is enough to get this bad boy going.

A little known trick to cut down the amount of oil in cakes is to instead add apple sauce, or mashed banana. Since I happened to have a couple of overripe bananas lying around, banana it is. I only used one. Mash it in a cup using a fork, or you can throw it in a blender if you’re so inclined. I prefer the fork-mashing method, because it means I got a few clumps of banana in the cake. It added some nice texture.

Mix the banana in, then come the strawberries. I washed and cut the tops off of about 20 strawberries. I was really winging this, so I’m sorry I don’t have a proper measurement. I used a hand blender to puree them, and ended up with about a cup to 1 1/4 c. of puree.

At this time, I also added 1 tablespoon of oil, to make sure that this thing had enough ‘fat’ to bind it well.

Stir everything in the bowl again until well combined.

Now it’s time for the coconut. I debated back and forth about toasting it, and in the end, I think I should have. But only because I adore toasted coconut. In the interest of time, I just threw the chopped coconut in as is, 1 cup’s worth.

Next, get your cake pan, cupcake pan, whatever you’re baking this thing in, and butter/flour it, or spray this handy dandy ‘cooking spray PLUS flour’ all around the bottom and sides. Just enough to have a nice film.

Pour the batter into the pan and smooth out the top.

The instructions on the box said to bake the cake for 30-35 minutes at 350F. So I set the timer to 30 and let it go. But at 30 minutes, this cake had far too much wiggle in its jiggle. So I gave it another 15 minutes, and the fork test came out clean.

We left the cake to cool overnight before icing it. Mostly because I had just finished cleaning the kitchen and didn’t want to do more dishes. If you’re going to do that, just make sure you don’t cover the cake with anything while it’s hot. I learned the hard way many years ago that doing so will cause steam to make the top of the cake clammy and gummy and gross.

You’re not going to get sick from eating uncovered cake, so don’t worry about it until the next morning if you don’t want to!

At this point, my dears, I was going to try making that 7 minute frosting my friend Maggy is always going on about.

But my kitchen was still clean, and I just happened to need a grocery trip, so I’m not ashamed to say that I ended up with a can of Pillsbury’s FunFetti White icing. Picked it over Betty Crocker’s because it doesn’t have any high fructose corn syrup in it. I’m not a fan of the ol’ HFCS.

So here’s our finished product.

Great for Easter picnics, parties, and barbecues? You betcha. And at least it doesn’t have all that oil, and instead has some healthy fruit. And because of the fruit, the cake is incredibly moist and flavorful.

Directions
Bake as described on box, though may need extra time due to the fruit additions. Bake until fork or toothpick comes out clean, and the cake has started to pull away from the edges of the pan slightly.

Frost however you’d like, and enjoy with a tall glass of cold milk or a cup of strong coffee. 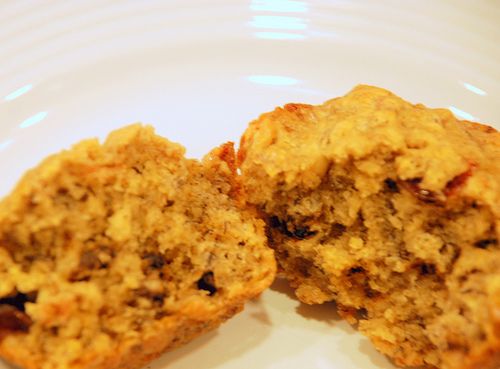 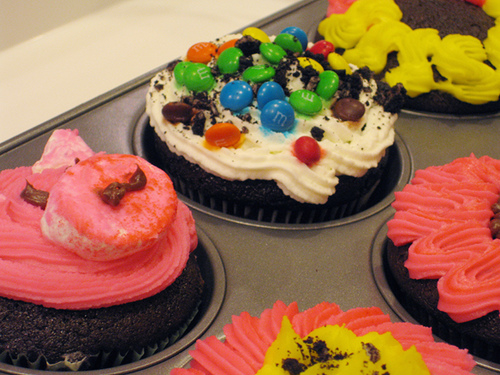 just bought strawberry cake mix, found an overripe banana and a box of strw/banana jello. Googled for some idea of how to put these together & how they'd bake. Your experiment was very helpful. thanks

I love the looks of this cake. Will be trying it soon. Thanks.