I’ve decided to add a little something different today, and post about a recent adventure James and I went on with my parents. We love to travel, and I think it’s about time I talked about it. Whenever I write about our travels in future, I’ll title the post Bluebonnet Adventures.

A lot of people don’t know this about me, but I love history. If I had to choose another subject to do a degree in, it would be History. This is kind of surprising to me, because in school, while I liked it, I didn’t LOVE it.

It wasn’t until I’d spent time in England and Wales, walking around castles and graveyards and churches that were, in some cases, nearly 800 years old, that I began to appreciate history for what it is – a story. The story of someone who lived and died – and lived!

My first time in Philadelphia – whoa. I was struck by how young our nation really is, and how easy it is to forget that. So much of Philadelphia has been kept as it was when our country was founded. Philadelphia was our nation’s first capital, and maybe I’m seeing this from an outsider’s perspective, but to me, they’ve done a spectacular job of preserving the feeling of a newly born port city.

Especially in Old City and Center City, the two oldest areas of Philadelphia.

As you walk through Old City, you fully expect to see horses tied up to the still standing posts, Revolution soldiers spill out of the nearby City Tavern. (Try the Sweet Potato Biscuits, made from Thomas Jefferson’s own recipe.) 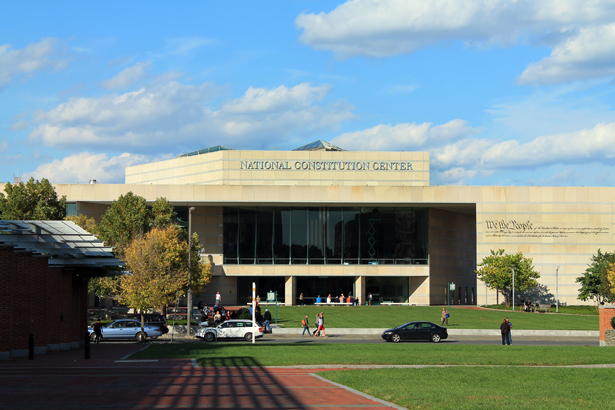 The National Constitution Center is just across the street from Independence Mall, which houses the Liberty Bell. 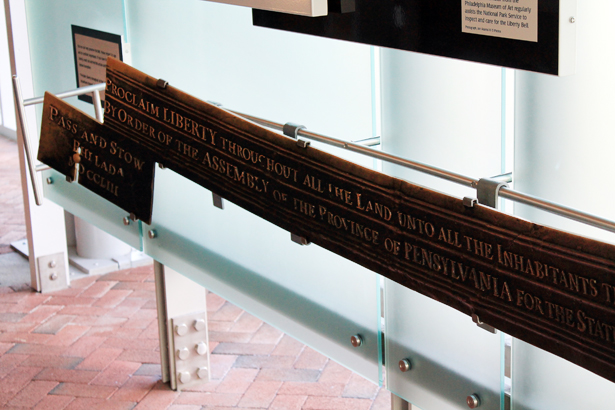 The National Constitution Center has to be one of the most interesting, interactive museums I’ve ever been to. There are so many exhibits to check out, and almost all of them are interactive. Probably my favorite exhibit, though, is the Declaration of Independence Signer’s Hall. Here, lifesize bronze statues of each of the Declaration’s signers stand and sit around the room.

Find your favorite founding father and stand next to him – see how you match up. Quite a few of them are very tiny! Ben Franklin’s statue carries on the tendency of people to think he’s good luck (people often toss pennies on his tomb and make a wish in the nearby cemetary), for his bald head has a fine sheen from people rubbing their hands on it, Buddha like.

Walking in any direction, you simply breathe in history. I honestly felt those courageous, clever souls of the Founding Fathers wandering through the city. There’s a hopefulness in Philadelphia, a sense that anything is possible.

Also in this area of town is Elfreth’s Alley, the oldest continually inhabited residential street in the nation. Walking down this street is nothing short of stepping back in time. Each of the residences has been preserved, and people still happily live modern lives here. 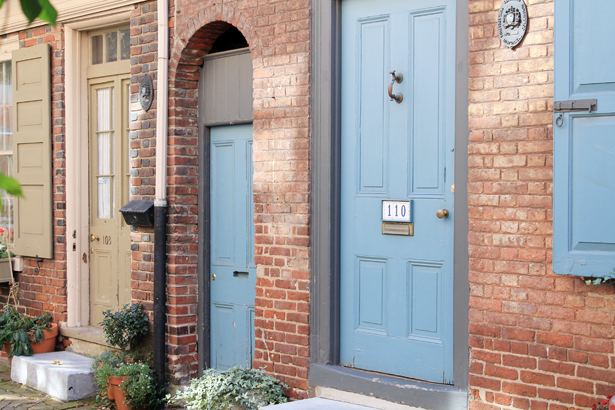 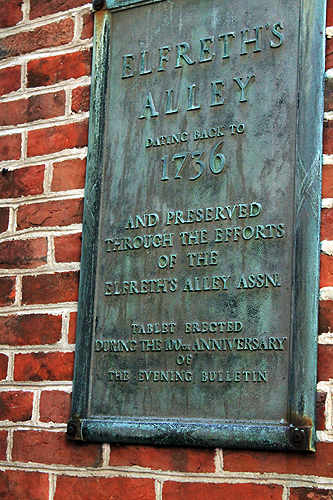 From fresh flowers and freshly ground coffee to Food Network featured Cheesesteaks, eating and shopping your way through Reading Terminal Market is a must-do. 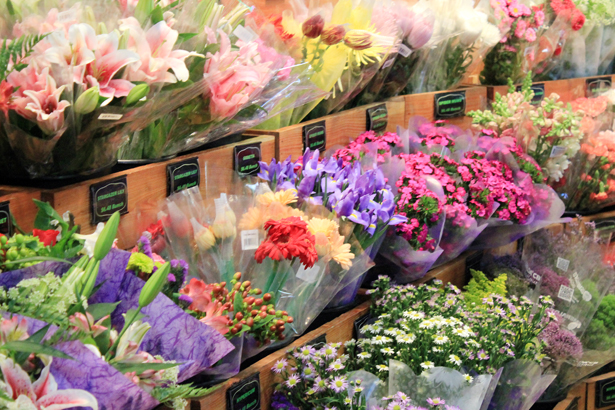 Fresh flowers are hard to resist – they smelled like sunshine and happiness! 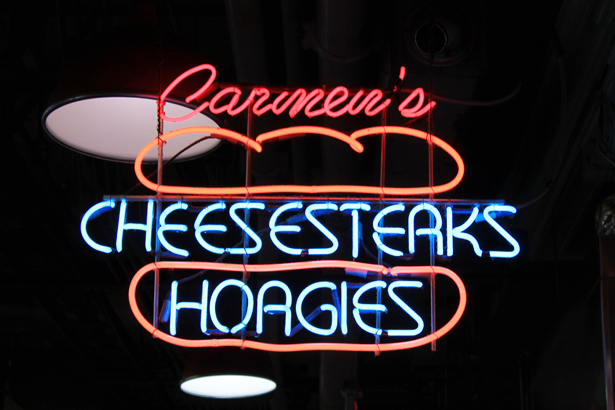 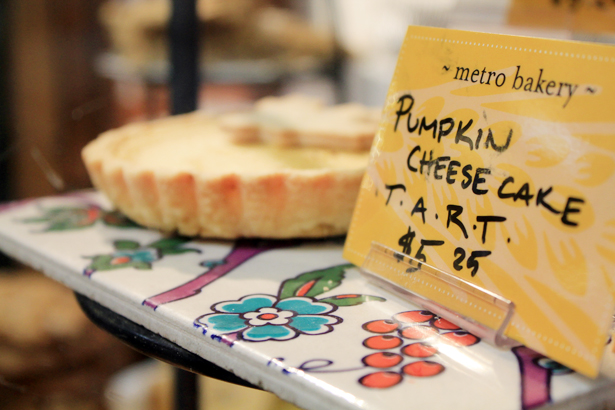 Who could resist Pumpkin Cheesecake Tart? Certainly not me.

This is but a taste of what you can do and see in Philadelphia, but certainly some of my favorite spots. I hope that you’ll visit and have your own adventure! 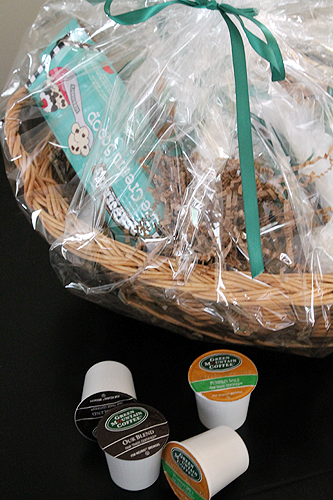 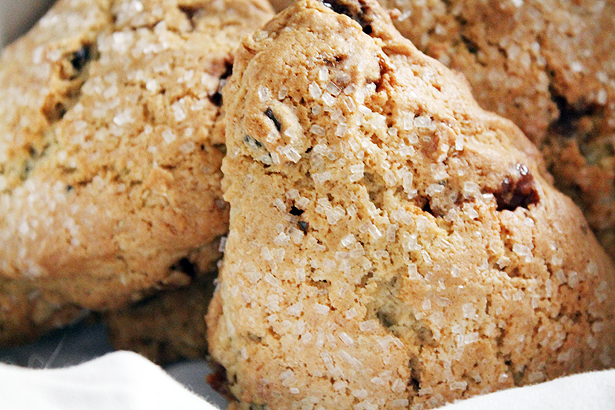 First of all I would like to say great blog! I had a quick question in which I'd like to ask if you don't mind. I was interested to know how you center yourself and clear your head before writing. I've had difficulty clearing my thoughts in getting my ideas out. I truly do take pleasure in writing however it just seems like the first 10 to 15 minutes tend to be wasted simply just trying to figure out how to begin. Any suggestions or tips? Thanks!

Loved seeing all of your Philly photos! I live so close to Philly, but we don't go very often. Need to fix that soon. :)

OK, I've never been to Philly (can I call it that?) but you've inspired me. Great read and thanks for taking us on your adventures.

Aimee, you've got to bring the kids there! It's such an inspiring city, and I think they'd really dig the The Franklin Institute. It's our favorite museum because it is SO interactive. Noah and Matteo can crawl through a giant human heart to understand how it pumps blood, and there's an entire floor dedicated to steam engines and the first airplanes and how they worked. It's SUCH a fun thing! We actually have a membership because James loved it so much the first time we went. It gives us an excuse to go often.

Next time you go to Philly, I'm coming with you so we can eat at Tria (http://triacafe.com/). And look at awesome Brancusi and Rodin sculptures. But definitely not go see any professional sports teams.

Haha! Unless they finally stop the NBA shenanigans and the Spurs are playing the 76ers. Then we will go and root for the Spurs. Deal?

Beautiful photos and it sounds like such a lovely place! I'd love to visit Philly sometime!

I can't believe you've never been, Tracy. We are making that happen in 2012.