The Perfect Cup of Tea

True story about tea: When we lived in the UK, I took a misstep at the top of a very tall flight of metal stairs, and ended up falling down the entire flight. It was as painful as you imagine. The first step in first aid on the part of my British co-workers? A sugary, milky, strong cup of tea. I kid you not. As far as Brits are concerned, TEA FIXES EVERYTHING. And 99% of the time, they’re right.

But I hate to break it to you, kids. The majority of Americans do not know how to properly brew a cup of tea, and thus have a horrible experience with it when they do.

Another true story about tea: one of my trips home to San Antonio after living in England, my Nan offered to make me a cuppa. (That’s British slang for hot tea. Keepin’ it real.)

She plopped a tea bag into a cold cup of water and stuck it in the microwave to heat. If you already know how to brew tea properly, you just cringed. Others of you may be asking, “What’s wrong with that?”. Yep, I’m looking at you.

You know how much I love my grandmother, and how she is the reason above all that I blog and cook and bake and live. But Nanny, that was the worst cup of tea ever. In the history of the world.

The reason for that is that tea leaves are delicate. They are incredibly sensitive to temperature. So much so, that even adding boiling water to a tea bag in a cold mug can shock the leaves into seizing, which results in incredibly bitter tea. Heating a tea bag in cold water did exactly the same thing.

Bitterness is the number one complaint I’ve heard from anyone who ever told me they didn’t like tea. So I’m going to tell you how to brew a proper cup of tea.

When brewed properly, tea is something to revel in. It will improve your life. I promise. I wouldn’t promise if I didn’t know it was true.

Plus, there’s something in it for me. I never want to have another cup of tea like what Nanny served up that one trip home. God bless her, it was the stuff of nightmares.

Here are the most important things about brewing a cup of tea:

Start by boiling water. I highly recommend having an electric kettle in your life.

I’d never seen one until I moved to England, but now I don’t know how I ever lived without one. It’s so much easier to make tea, hot chocolate, even pasta, because I know I’ll have boiling water in about 3 minutes. I use my kettle at least 3 times a day, if not more.

While your water is coming to a boil, run water from your faucet until it is as hot as it will go and fill the mug you want to drink from with it.

Just as the water begins to bubble to a rolling boil, empty the water from the cup (usually, I use mine to water the plants, or add it to a sink full of dishes ready to be washed).

Put the tea bag in the cup, and pour the boiling water on top, leaving enough room for milk if you desire it. 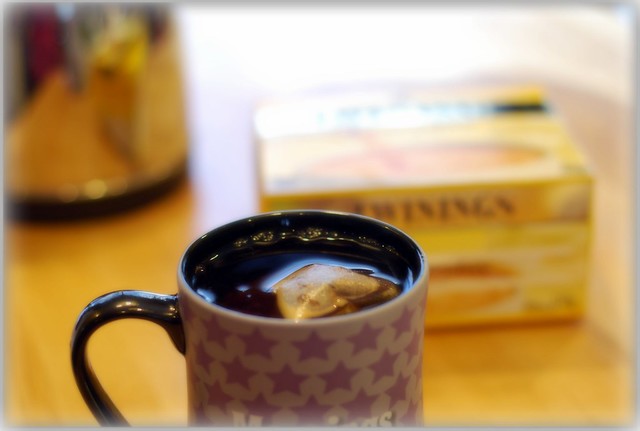 Now listen to me: Walk away for 3 to 5 minutes. If you like “Builder’s Tea”, i.e. really strong tea like a construction worker would enjoy, leave it untouched for the full 5 minutes. 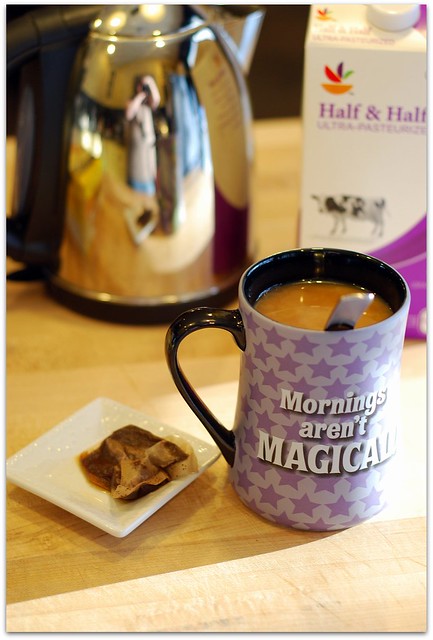 Remove the tea bag, then add milk, half and half, sugar, Splenda, whatever you fancy. You’ve just brewed the perfect cup of tea. Good work! 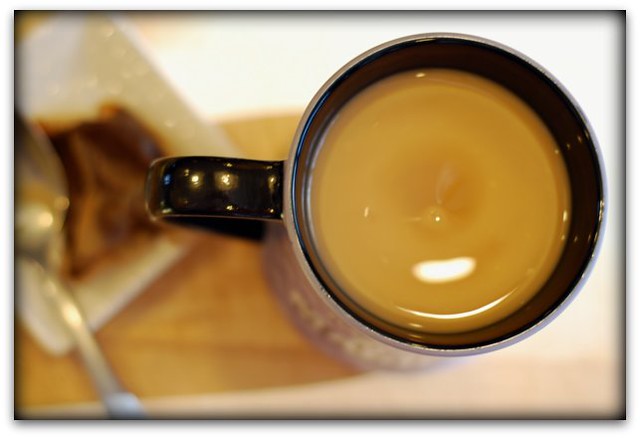 Next
Bring a tea kettle into your life

[…] who knows me knows that since living in England, I’m obsessed with a perfect cup of tea. Usually I go for a strong every day tea, or Earl Grey, but I’ll certainly admit that a milky […]

As a Brit who recently moved across the pond to the US (and thereby a huge tea drinker), I applaud your tea making instructions! However, there's one thing that you just can't do to your tea in America with the same result, and that's adding milk. The milk here is disgusting in hot tea! It's obviously processed differently and has a very different flavor. I've actually given up on milky tea and now will only drink it black in the US!

I urge you to try tea with half and half. My British husband thoroughly approves! Or try organic milk or raw milk, you might find either is much more to your liking.

I just mentioned to my workmates that I knew people that had grown up without ever using a kettle - there was a lot of disbelief.

Keep in mind that while strong black teas will almost always want milk adding, you dont have to add milk to black tea - some lighter teas (like darjeeling for example) can have their flavour completely obscured by the milk. Try Earl Grey (a medium tea) without milk, maybe a little sugar to bring the flavour forward, you might be surprised.

My favourite tea fact - during steeping (when you add boiling water and let the cup or teapot stand for a few minutes) the leaves will unfurl, this is called "the agony of the leaves".

I never realized there was an art to making a cup of tea!! Gotta try this one after a rough day.

love, love a perfect cup of tea...paired with a clean kitchen, nothing is better,lol