So this post isn’t by your wonderful blog author, but instead her web tech and general dogsbody husband, James.

She’s been nagging me for a while about posting my recipe for Rock cakes, so here you go. Enjoy!

For the uninitiated, rock cakes are exactly what the name suggests – little cakes with fruit in, that look a bit like rocks.

My Granddad taught me to make these when I was so high, and they’ve never let me down yet.

So, onwards to the baking!

Here’s what you need.. 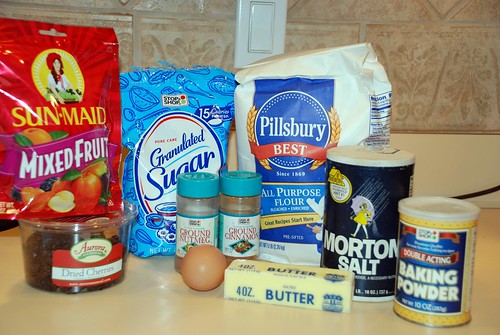 Now, this isn’t quite what I wanted, my granddad always used nutmeg and mixed spice, but unfortunately I couldn’t find our mixed spice and a trip to the store also proved useless, so I substituted the mixed spice with cinnamon.

I’m not a huge fan of cinnamon, so the final product tasted a little weird to me, but the wife liked it plenty.

It turns out that mixed spice is fairly hard to find in the U.S., so if you can’t find it either feel free to use cinnamon.

One other thing while I’m obsessing about spices, is that if you’re into Nutmeg and use it with any regularity I highly recommend getting whole nutmeg and a grater, and grating it as you need.

The taste is much better, and the smell is like nothing on earth – freshly ground nutmeg is still one of my favourite things.

You should be able to get it in the grocery store right next to the ground nutmeg, and it’s well worth the effort.

As you can see, I’m too lazy to follow my own advice and this time I’m using ground nutmeg. Bah.

OK. Less rambling, more baking. Start by sieving the flour. I know, the bag says pre-sifted. Sieve it anyway. Dump it into your mixer. Drop in the salt and baking powder.

Then chop the butter into chunks, soften it a little to speed the whole process, then in it goes too. 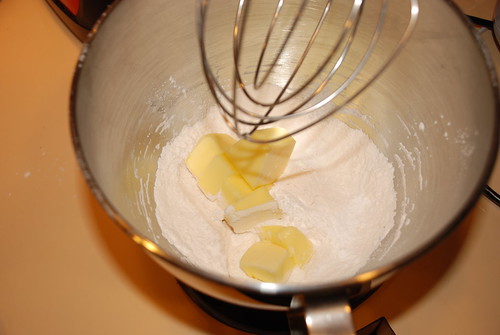 Turn the mixer on. If you don’t have a mixer, break out a whisk or a spoon, and practice your wrist action.

Keep going for a minute or two, until the mixture goes from yellow blobs in white flour to more like fine breadcrumbs.

Have a poke around – there shouldn’t be any lumps of butter left. 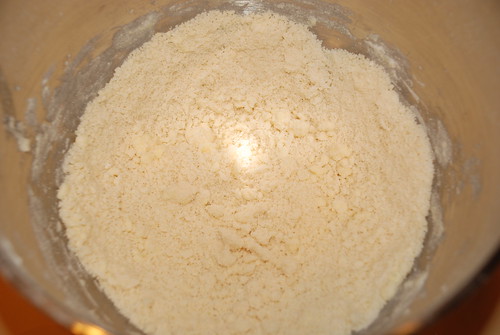 Then add the sugar, and spices, and mix it together just for a few seconds. Now the fun part – add in 1/2 a cup of whatever kind of chopped dried fruit you like.

It was at this point I realised we only bought whole dried fruit, not chopped dried fruit, and the cakes would be very odd with whole fruit in the middle.

I dropped them in the food processor, added raisins, and we’re back to the program. 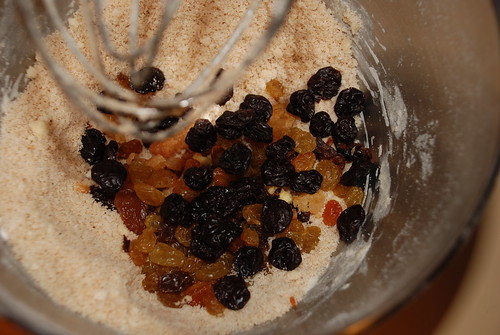 Again, just swish these around until they’re all evenly distributed. Then crack the egg into a bowl, whisk it lightly, and pour it in.

Give this a bit more thorough mixing, it should turn into little balls of goodness, almost like dough but not quite held together enough. 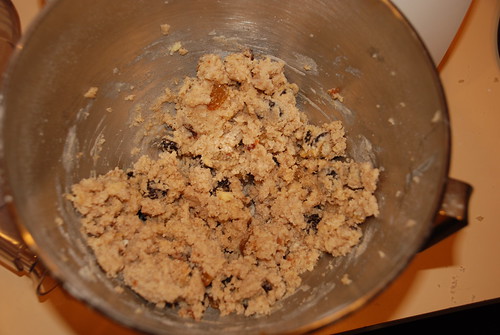 This is where you add the splash of milk – you just want enough to hold it together as dough, but the more you use the less rock-like they’ll be, so just put a tiny amount in, mix around a bit, and add a little more if necessary. 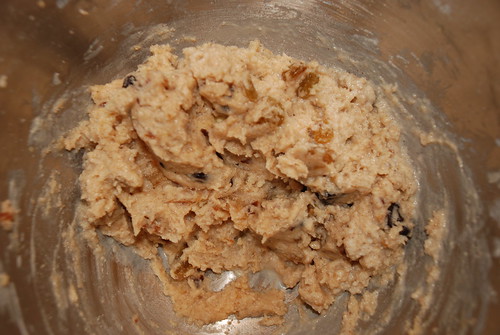 If anything I used a little too much milk here, but never mind.

Spoon the mixture out into dollops on ungreased baking sheets. The shape doesn’t matter, in fact the stranger the shape the rockier the cake! Someone should put that on a T-shirt. 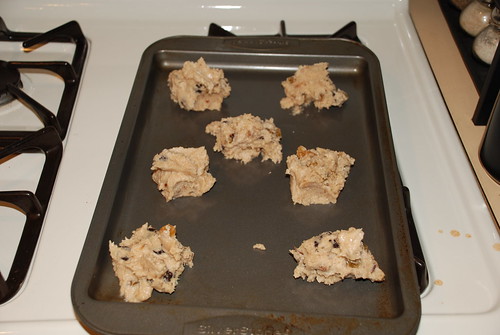 Anyway, bake them at 425°F for 15-20 mins. Check them every couple of minutes towards the end, you want them brown, but not burned on the bottom.

Then just let them cool, and enjoy! 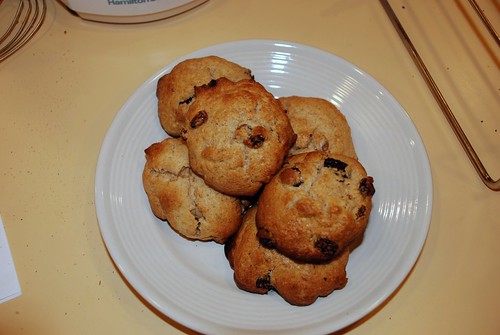 Mmm, look at them…

That’s all folks. If you try it, leave a comment and let me know how you get on!

Will keep in an airtight container for about 5 days.

Nutrition information isn't always accurate and is based on databases outside my control. Please use your best judgement. 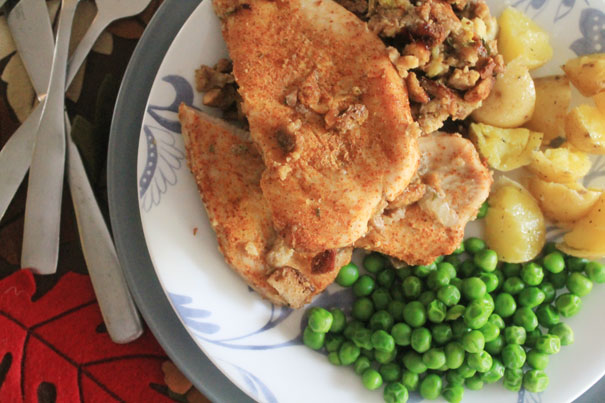 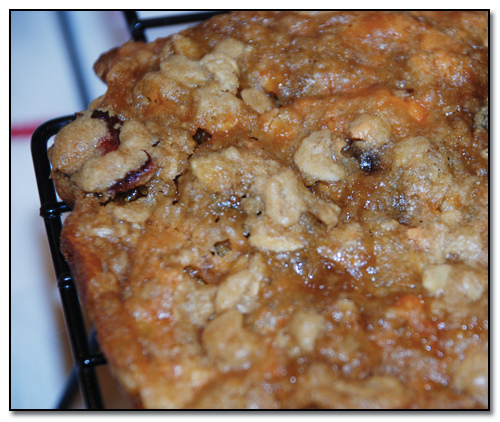